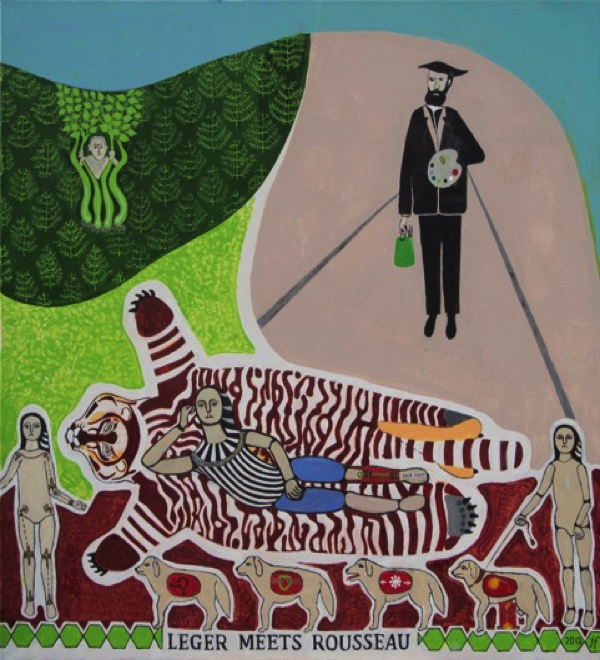 The picture illustrates how others’ art can stimulate curiosity. One’s own art opens the way to understanding meaning and quality in others’ art.

In “Leger meets Rousseau”, the original ideas contained in Leger’s work can be woven into what Rousseau did. In the particular picture, Rousseau’s painting was of a naked woman on a couch in a jungle setting. In another Rousseau painting, with the figure of Rousseau standing, prompted my idea to make a painting of elements of each artist. Rousseau stands as he had placed himself. Leger, keen on mechanical things, inspired making women standing with mechanical joints in the left hand woman and black joint-lines in the right hand woman. The dogs show what Leger might have done for the dogs — one is pissing on a hydrant from a flask, the next dog has a fan in it for ventilation, its tongue hangs out. The next one has a pump for blood circulation and the final dog is thinking(!). A woman dressed and equipped with a modular artificial left leg, reclines on a tiger skin draped over the couch. She is being spied upon by a man in bushes. My painting corrects Rousseau’s posture of the feet from tiptoe to the natural angulation at the ankles. The animal skin matches the clothing of the woman, elongated and curved to avoid a clash.