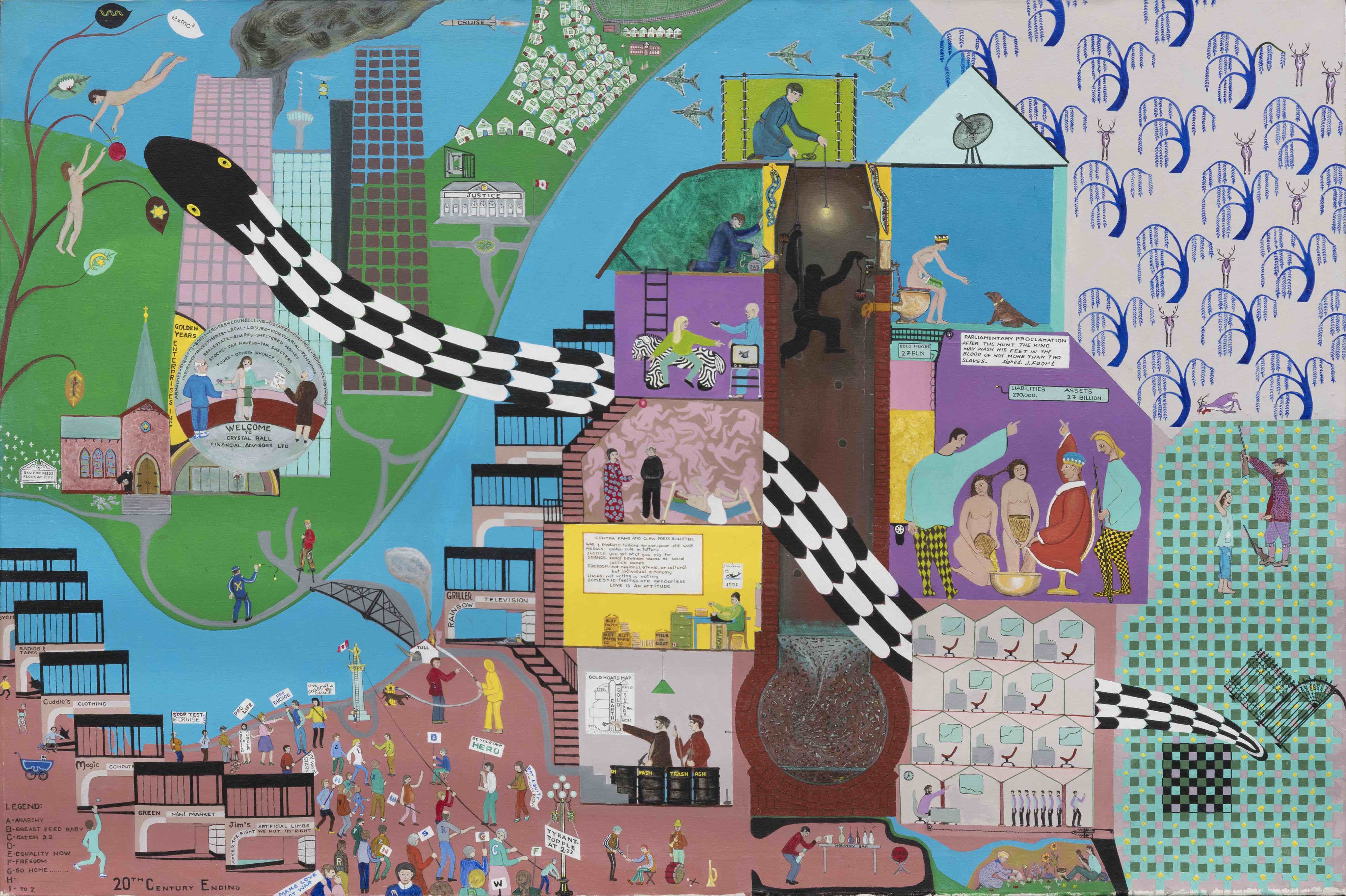 This is the largest of my paintings, so much to say in it. Someone who preceded my mother’s birth had said, and she said often, MONEY IS THE ROOT OF ALL EVIL. Since then, having sensitivity toward her BELIEF in that, I see utopian visions best expressed in RELATIONSHIPS. It adds FLEXIBILITY to the idea of utopias, (Marriage, for example). In such a view, utopias have an immediate significance with people moving in and out of them according to their worth seen without disturbing what is essential in the utopian proposition. We have seen the most sensitive systems rise and fall, subverted by the power hungry people who gather a crowd around them with high promises and poor hopes. Greed, selfishness, forcefully used power embodied in wealth, a clever sense of persuasion, and all the rest, must arouse suspicions that something is NOT RIGHT. We are aware that SKEPTICISM needs to be taught and learned; a CANADIAN WAY.

The large snake represents evil. Of course there is no such thing as evil without INTENTION FOLLOWED BY AN ACTION. Action is the essence of reality. If you doubt it, review any history lesson you have had, for confirmation.

At the tail end of the snake is the KING, his possessions — including the hunter facing options of a bribe or fine payable to a warden of the king’s wealth (subservient armies or insensitive police for example) and the women slaves tending the king. The guard behind the king is gaping at the sight of what he guards. In the yellow zone, two plotters against the king’s gold face the trap of drowning in sewage should they break into the booby trapped sewer. Above them is a woman fighting for equality sitting on a box at an ancient typewriter. Above that, is a trick bed for squeezing more money from a client by blaming him for the simulated break in the bed, the prostitute’s mirth her reward.

Above that, a woman says, “The TV is busted”. The gang leader offers her a gun to get a new one.

To the right, slaves wash the king’s feet in gold. His broker indicates how wealthy the king is and the king is not pleased, wants a higher yield. Above, the queen, disturbed by trying to stay slim for the king’s imagined pleasure, sits on a toilet that will be blown up if the one rigging it with explosives gets it right, blowing himself and the helper up too. The goon, not knowing better, holds the light for the one laying the charge. The snakes lingering in crevices might be the helper’s hazard as he holds the light. The signal system in the attic will resolve things in the king’s favor.

Near the snake’s head, a building is attacked with bombs and further, toward the village, is the JUSTICE DEPARTMENT. Note: punishment, not health care and education, motivate reactions in the justice system to unsocial behavior.

To the left at the bottom are domestic scenes going on, hardly noticed because of indifference or lack of awareness.

A man in a jogging suit sees the vendor of wealth naked. His wife sees the vendor as well dressed and at her service. In the left hand corner are art deco shops, all the same, all differently used. Beside them are the domestic activities — pro life, pro choice. Veterans against nuclear weapons and their horrors occupy VANA. A pair demonstrate for love. A man sleeping rough is being blamed for a fire. A policeman with a bolo as a weapon, chases a person on stilts who is the fire bug. In the top left, are Adam and Eve at the snake’s head. Search out these and other clues to form your own conclusions concerning meanings in the painting.

This view of affairs, has counter forces operating. Everything seen as a possibility is, in fact, a fiction. I feel guilty for the painting as I feel the fear in possibilities. Who will save a drowning person, who is unable to swim? For that, there must be a force operating that feels empathy for another’s dilemma as though it were one’s own. That is not felt out of fear or recklessness, but out of an instinct that sees another’s difficulty as its own. The picture strikes me that way. The accounts of possibilities in the diabolical episodes are to be seen in a flash as prospects in the opposites. Such would take us to a position beyond self preservation. Mythical account; Horatio at the bridge, for example, or heroes who comfort a wounded opponent, come to mind. Let us heed myths as having the power of facts, at least for others, though impossible for ourselves, seen as celebrations of what we don’t know. The next step in our evolution may be as simple as understanding that another’s fate can be felt as one’s own. Actions would be to see without thinking, the extremes possible in what motivates us to recognize our fate in another’s. It would be wonderful for geneticists to discover genes that take us into a state of knowing such a prospect. The reptilian brain concept would be replaced by the improved genetic prospect.